What is The Best Way to Deal with Damp?

When you discover signs of damp in your home, you can have a bit of a panic. After all, we hear horror stories about damp reducing homes to smelly, uninhabitable ruins that cost a fortune to put right. But in the vast majority of cases, damp specialists will come in and find a solution for both the cause and the results of the damp issues. So, the question of what is the best way to deal with damp starts with looking at what kind of damp is affecting your home? 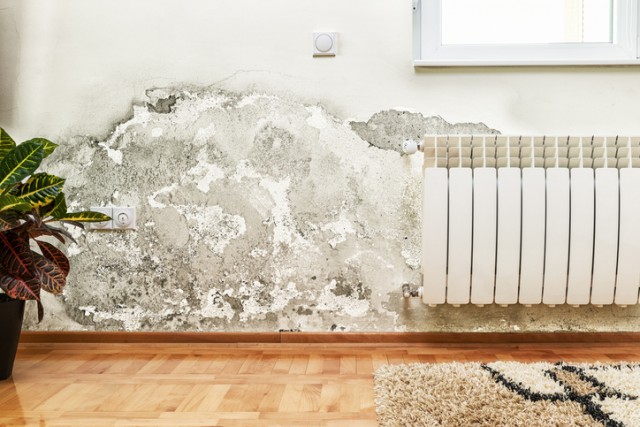 The big three of damp

There are three main causes of damp in a property, each with its own situation, causes and results as well as paths to deal with it. To identify which one is affecting your property, you need to know the basics of each condition – at least enough to know to ring those damp specialists in the first place.

Top of the list is condensation and according to Which? around 31% of homes either have problems with or have had problems with condensation. While it is the least worrying and the easiest to control, it can allow much worse problems to set in so should be recognised and dealt with as quickly as possible.

Condensation is a natural process where warm air containing moisture molecules touches something cooler and releases that water. It is often a problem that is at its worst during winter when heating is on high and windows are closed against the cold.  Older houses can also have real problems with condensation as they were built before modern understanding of the issue came about.

Signs of condensation might look somewhat innocuous and harmless – often water droplets on windows and walls, even some furniture. You might think that one of the kids has run the shower for too long again or that cooking the Sunday roast has meant the house got a little too warm. And you would be right but it is also a problem that can lead to other issues.

On its own, condensation can damage paint and plaster as well as cause decay in any wood that it regularly affects.  It can also allow the growth of black mould, those little black dots that appear in the corners of the room and suddenly blossom to cover whole sections.

If you think you see condensation, the first thing to do is simply wipe away the moisture.  Then look at the ventilation in your house – are there any windows open?  Are there air vents or air bricks to allow air flow?  Do you have the heating up high then off completely?

Spotting signs of mould and other damp related problems means you should definitely call an expert in as soon as possible to prevent them spreading.

Normally, the problem of rising damp is dealt with by a damp proofing course but if this fails or isn’t present, then you can run into problems with this damp condition. It is normal that groundwater is sometimes absorbed through the bricks of your house but when it hits the DPC, it stops. However, if the damp proofing isn’t up to standard, then the water can continue to rise and affect the interior of your home.

Standing outside, you should be able to see a damp-proof course around 15cm above the ground.  Sometimes, a membrane is used or even a chemical injected into the bricks to stop the water rising above a certain point.  If you are unsure if there is a DPC, call an expert to carry out an assessment.

Signs of rising damp include peeling and stained wallpaper inside your home as well as salt marks where the water has risen then evaporated. The walls might feel spongy or soft to the touch and you may smell that musty, damp smell around the symptoms.

Depending on why the condition has occurred, damp specialists will look at different steps to deal with the problem.  This might involve renewing the damp proof course or use a different method.  It will often also mean some work inside the property if you have tide marks or salt stains on your walls.  Special damp resistance plaster is often used to protect the interior walls and stop the growth of black mould and other unpleasant conditions.

The third of the common damp problems is called penetrating damp. This is the type of condition that happens when you have a weakness in your weatherproofing such as a missing roof tile, broken guttering or cracks in your walls.  These allow water to penetrate the house and increase the moisture levels within. Around 18% of homes experience penetrating damp in some form.

Sometimes, penetrating damp can be hard to spot as the dark patches from leaking water may only be visible when it rains.  Mould growth is another sign that there is a problem as the higher moisture levels caused by the condition allows the growth of spores that lead to conditions such as wet and dry rot. So any signs of these growths, call an expert.

Penetrating damp is treated by stopping the cause of the penetration first.  Then the damp experts can look at remedy anything other conditions such as black mould and prevent them from spreading any further through your home.  Sometimes, timbers may need to be replaced if they have been weakened during the growth of the mould or fungus.

If you think you see signs of damp in any form or are unsure what you are looking at, then call a damp expert such as Tapco HomeDry to come and carry out an assessment. The causes and problems of damp can be devastating but much less so if they are caught early and dealt with.