Problems with cracked walls are always a big worry for homeowners.  Not only does it look an unsightly, but it is possibly a problem structurally and letting water into the property, which could lead to damp problems.  That’s why it is important to investigate and understand these problems as soon as they become apparent. One of the most common reasons for structural wall cracks is problems with cavity wall ties, but what are these and how do you spot them as the problem?

Do you have cavity walls?

The first question is one you may know the already the answer too, especially if you have had work done on your home – Do you have cavity walls?  Many homes built from the 1930s onward have these features which were designed to stop rainwater from penetrating the house and causing damp and keeping the rooms warmer internally.

If you don’t know, you can look at the arrangement of bricks in your walls for some hints.  If bricks alternate between length and width directions of being laid, there’s a good chance that you have solid walls.  But if all of the bricks are lengthways, then it is more likely you have cavity walls. An easier way is to measure your window or door reveals. If they are 9/10” thick they are likely to be solid brick walls, if they are 11/12” thick they are likely to have a cavity.

What are cavity wall ties?

If you have cavity walls, then you also almost certain to have cavity wall ties.  These are the elements that bring together the internal and external walls. They are a metal strap that are spanned across the two layers of bricks, at certain intervals, during the construction of the walls, the ends are embedded into the mortar between bricks.

The idea is that the ties span the cavity and ensure the two walls are secured to each other.  This adds to the structural stability of the house. Outer walls tend to be high and slender that makes them more vulnerable while the inner walls are tougher and load-bearing.  By using wall ties to draw the two together, the house is better able to cope with small movements, fluctuations in temperature and to keep water out.

Spotting if wall ties have failed

Spotting failed wall ties isn’t always easy and a quick glance might not tell you to what extent they have failed.  However, there are some common signs that will indicate a problem that is most often to do with the wall ties. 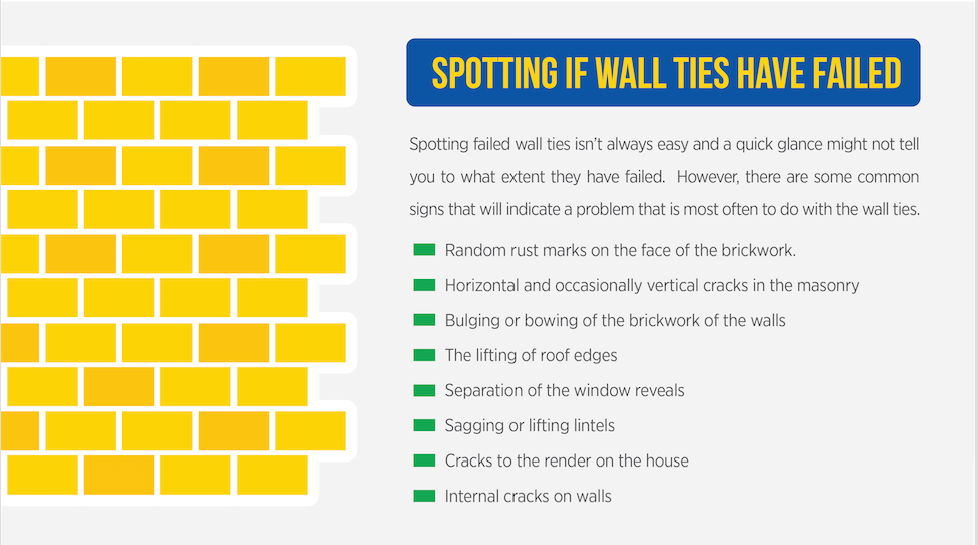 If you spot any of these signs, it is often best to have an in depth cavity wall tie survey to look at the problem and see if the ties are the root cause.  Experts will often use equipment that is similar to endoscopes to find out where there are problems and how bad it is. If there are signs that the inner and outer walls have separated more than they should, this is also a sign the ties have failed.

It is best to get an expert inspection of the property if you think there is a problem.  A structural engineer or other qualified experts will be able to assess the damage. They may use things like metal detectors to see if the cracks correspond with the location of ties.

Like most things about construction, the best materials and systems are used when a house is built but over time, these may change or improve.  However one of the reasons that cavity wall ties fail is that there may have been a construction defect when the house was built. Maybe the ties were placed incorrectly, fixed too long or too short or the mortar was poor quality.  Very occasionally, they may have been missed out entirely.

Another reason that they may fail is due to time and corrosion.  At one time, ties were made from steel and a galvanised coating was added to them.  The problem is, we now know that these ties can corrode within 20 years of construction.  That’s because the steel expands due to the presence of rust and this can make them several times thicker than they were original.  It also causes them to force the bricks apart, creating those cracks and compromising walls.

This situation can be a serious one and a lack of strong cavity wall ties runs the risk of the property’s outer wall collapsing, causing serious damage and potential injuries.  Therefore it is important to get expert advice on the situation very quickly.

Very occasionally, the problem comes from external factors.  Gale-force winds have been known to weaken some older cavity wall ties, placing pressure on them that causes damage.

This can also lead to the collapse of walls so is potentially dangerous.

Once a problem like this has been diagnosed, the next step is to look at replacing the cavity wall ties to strengthen the house once more.  There are a few different options that you can choose from and your expert will talk through them with you. But here are the basics.

Mechanical remedial wall ties make use of a 304-grade stainless steel rod.  This rod has special expanders on each end made from neoprene and is installed by drilling 10mm holes at intervals along the wall to insert the tie.  A special nut on a drill is then used to tighten, causing the neoprene to grip the brickwork and tie the walls together. This system is best where brickwork is in good condition.

These ties are used for building facades, structural members and to stabilise buildings that have multiple width walls.  They are also able to work on lots of different types of building materials. Both walls are drilled with a special drill and the tie is then driven into it.  The tie has fins that anchor it into the walls. It is suitable for any structurally sound building type.

Resin ties can be inserted into holes that a pre-filled with resin then more is pumped in through the tie to fill the other end.  All the resin then sets and ties the two walls together.

This system can be used in any material including brick, lightweight block and timber frames and is best if there are any doubts about the quality of the walls. 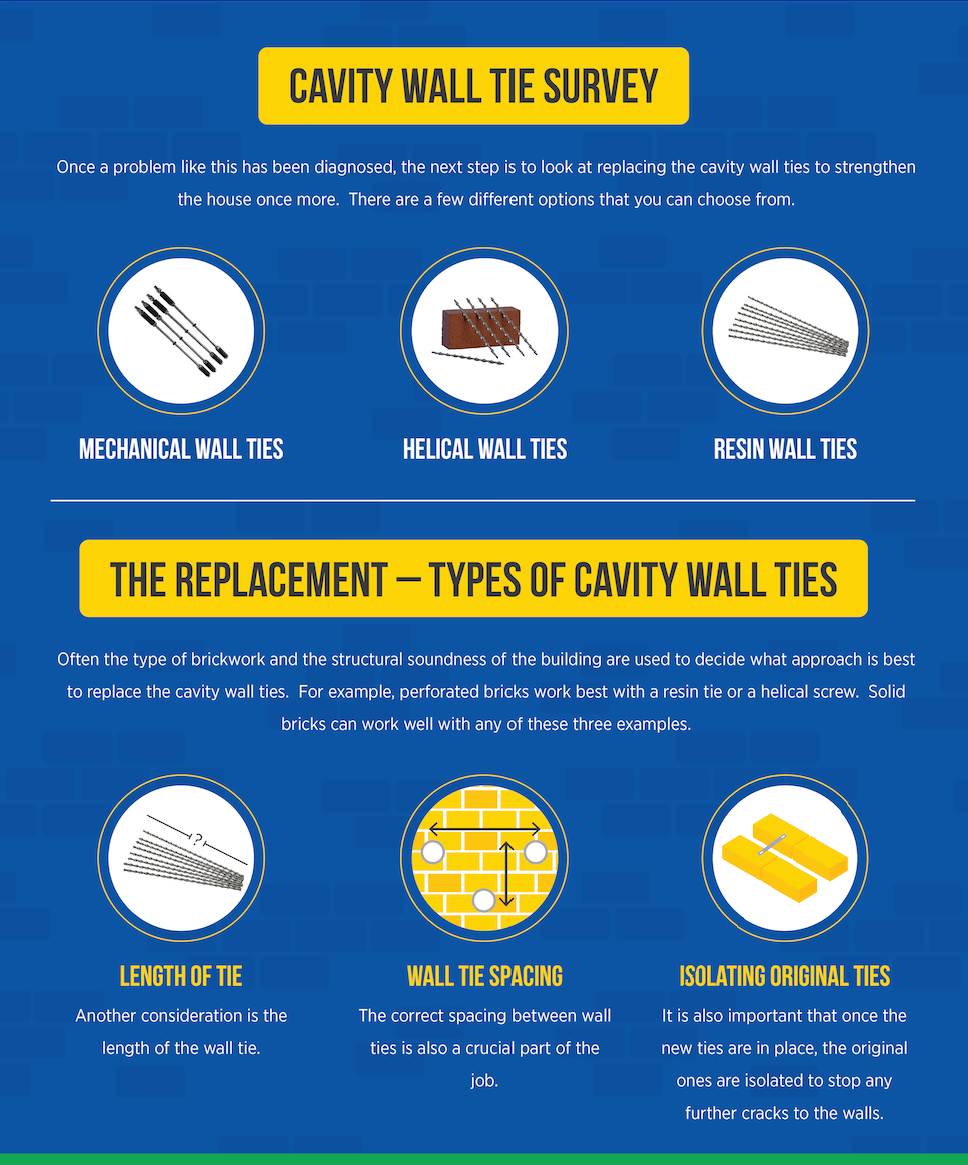 Often the type of brickwork and the structural soundness of the building are used to decide what approach is best to replace the cavity wall ties.  For example, perforated bricks work best with a resin tie or a helical screw. Solid bricks can work well with any of these three examples.

Another consideration is the length of the wall tie.  Typically, your cavity wall expert will find this out by drilling through the outer wall and measuring the distance until the bit touches the inner leaf.  Subtracting the thickness of the outer wall, this tells them how long the ties need to be. The building standards currently recommend that a wall tie should protrude a minimum of 50mm into each wall to be secure.

The correct spacing between wall ties is also a crucial part of the job.  It is recommended to have 2.5 wall ties per square metre of wall. So this means one wall tie around every 900mm horizontally and one tie every 450mm vertically.

Most experts recommend a staggered pattern that looks a bit like a diamond.  There should also be ties around windows and doors, at least every 30mm vertically and 225mm away from the opening horizontally.

It is also important that once the new ties are in place, the original ones are isolated to stop any further cracks to the walls.  The easiest way to do this is to add clan sleeves around the external end of the tie, which isolates it. And if it does keep corroding, which can force the brickwork further apart, they may need to be removed entirely.

The wall ties themselves aren’t that expensive, but the cost of the overall project can be impacted by a number of things.  These include the quantity and length of the ties needed if specialist insertion tools are needed if there are cosmetic repairs also needed and if scaffolding is required to reach them.  However, the risk of potentially catastrophic damage to the property means that it is important to have someone inspect possible wall tie failure as quickly as possible.