The issues of managing damp in old buildings isn’t new, as anyone who works with older properties will know.  Whilst more modern buildings are protected by damp proofing systems or can have them added, the situation is more complex with old buildings as strict regulations restrict what can be done. In areas, such as London, where there are additional considerations such as basements, cellars or under pavement vaults, additional problems are often present so different solutions must be considered.  So, what can be done to manage damp in old buildings?

At the heart of the issue is the fact that many years ago, there was little knowledge of damp, its causes and solutions until the last 150 years or so.  Currently, the UK has around four million properties from the Victorian and Edwardian eras and many of these have defective, inadequate or no damp proofing in place.

In the Edwardian period (1714-1837) very few physical damp proof courses were installed in properties though they did have open fires and a good understanding of ventilation and tried to keep moisture levels in properties to a minimum.

During the Victorian period (1837-1901), solid walls were still being used which were prone to rain penetration and became damp and cold.  Some were rendered externally which over the years becomes defective, allowing it to trap rain which penetrates the property.  Until not many years ago approximately 70% of a property material was timber, however these were untreated and because of the damp, were at risk of wet, dry-rot and woodworm.

Generally, by the Edwardian period (1901-1915) most houses had some form of damp proof course. These were installed during construction, horizontally, at the base of the wall, just above the ground level, to prevent damp rising by capillary action from the ground (rising damp).

From the 1920’s onwards, cavity brick walls were widely used.  This saw the use of two separate courses of brick wall – an outer to protect against the weather and an inner to provide a dry, warmer surface.  Although damp proof courses became compulsory in London in 1875, by using a layer or double layer of slate, by the 1920’s more modern materials were used, such as bitumen, felt or even engineering bricks. 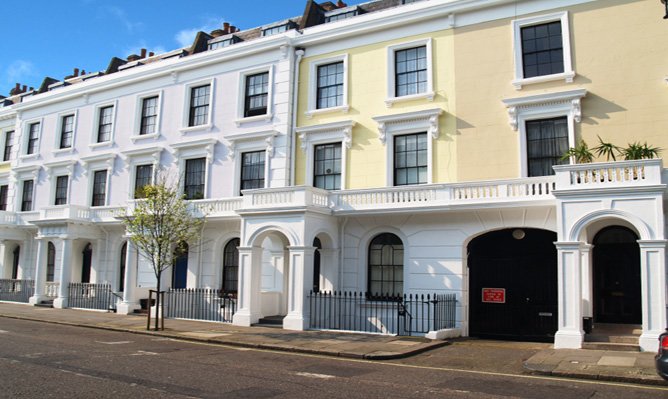 Many of the larger, older properties in towns and cities such as London have basements, semi-basements, cellars or vaults below ground level. These rooms and areas are very prone on lateral damp penetration as well as rising damp and rain penetration. With property at a premium, any space is valuable but to utilise these areas, special methods of damp proofing are required.

Something that is often under estimated in the capital, towns and cities of the UK is damage caused by heavy bombing during World War II. This vigorously shook buildings that weren’t hit, often causing structural damage, including the cracking of the old slate damp proof courses.

Managing damp related problems has to start with an assessment of any measures in place on the property to stop damp in the first place – have these failed or is there no DPC in place?  Once the damp expert has some idea about whether the cause of the damp is due to a failed DPC or the lack of one, then solutions can be examined.

Chemical damp proof courses are a popular option for modern properties but these can be more complex with older, listed properties.  The irregular mix of materials in the walls mean that creating a DPC with this kind of material must be carried out with consideration and care, taking into account the thickness of the wall and type of construction.

Damp proof membranes and structural water-proofing (tanking) are the solution for rooms below ground level as these provide a damp-proof barrier between the damp construction and the internal finish of the property. These measures are complex and should only be carries out by an experienced damp expert.

Dealing with an expert

The best course of action if you have an older building and think you may have a damp issue is to call out a damp expert.  Tapco HomeDry, who are based in London have worked on properties of all ages, across the country, for many years and can assess the nature of the problem and recommend the correct treatment to eradicate it.  They can then offer a solution that suits your problem and ensure that your property is dry for many years to come.